Once upon a time, in deepest darkest Africa (Southern Uganda to be exact) there lived a husband and wife who were among the first Ugandans to be trained as Primary School teachers. They named their fourth child Conche. She, with her ten brothers and sisters, lived an idyllic life in their small village of Kisubi, playing together in great freedom with their many friends and being looked after by all the grown-ups around.

After many adventures in adulthood Conche arrived in the USA and from there, when her children were older, she returned to her country from time to time and taught the village women how to put together a business plan and run a small business. These women became less dependent on their husbands and were able to send their children to school and provide other small necessities. 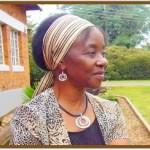 Then AIDS struck. On one of her visits home her mother said to Conche: ‘You have to organise something’. She knew the growing number of orphans needed to stay in their homes among familiar people. She knew that if they left their land they would have no means of keeping themselves when they were older. She knew all the needs of these orphans must be provided for if they were to thrive.

After much thought and discussion, she conceived a plan which later became Bega kwa Bega.  She had raised money in the US and in 1999 invited volunteers from the UK and US to help provide clean water tanks for families of orphans, work with the children and teach the women some skills.  This was in her home village of Kisubi.  Over the years requests have poured in from dozens of villages.  Wakiso district was chosen as the main focus of the work as it had been so adversely affected by Amin’s reign of terror and the civil war. Now the work has extended to over 200 villages in 10 districts.

All this has been made possible by those in the UK and USA who support BkB with the funds needed to carry out the work.  The thrust for the future has been towards BkB becoming financially self-sufficient which now in 2022 is at last in sight.

Because of the generosity of two donors, we have built a demonstration Primary School and have started building a demonstration Nursery School together with a Boarding Section.  A multipurpose building will provide a Hall / Dining room, kitchens, offices and a Centre for the Professional Development of in-service Teachers.  Not only will BkB provide an excellent education for over 490 children some of whom will come from poor, very disadvantaged backgrounds, but the school will make enough profit to pay for most of BkB’s other projects.  We look forward to the future with excitement and confidence